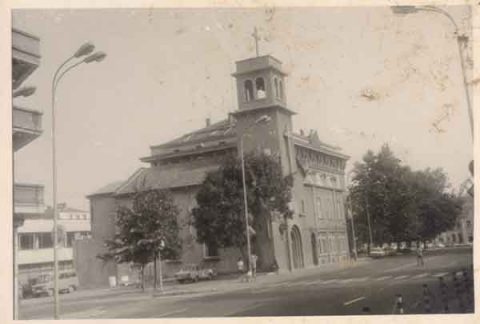 History of the parish

Catholics appeared in Bourgas during the mid 19th century when the economic rise of the seaport town began. In the beginning these were foreigners, mostly Italians, Frenchmen, Austrians. Initially their religious needs were met by non-resident priests who came from Varna.

The parish was established in 1857 as part of the Trebizond vicariate of the Capuchins with a permanent priest. Two years later, with donations from locals, a plot for building a church was bought, however the construction only began after the Liberation. By early 1860, the total number of Catholics in Bourgas were 46 people. Since then, along with the first mixed marriages of foreigners with the natives, marked the beginning of Bulgarianization of the Bourgas Catholic parish. [1]

In 1883 the parish became part of the Sofia-Plovdiv diocese. After this administrative change the first parish priest was a Bulgarian- Father Ivan Spasov from the Catholic village of Baltazhdii.

On 22nd of February, 1927, Bishop Vincenti Peev issued a special decree declaring the parish juridically with all the rights and obligations that the church community has in the Catholic Church. In June 1927 the parish community expanded to 137 people. [2]

In 1929, Father Anton Yovchev – a capuchin, born in the village of Baltazhdii in 1876, was appointed parish priest. During the time of his service, the old house and the old church were demolished and new ones were built. The new parish home was completed in 1935. Father Anton Yovchev served in the parish until his death in 1943.

From 1983 to 1999 Father Kupen Mhaylov was a parish priest in the two Catholic parishes in Bourgas- “Assumption of the Virgin Mary’’ and “Mary, Mother of God”.

After a 21-year absence, the Capuchin friars returned to the parish on 15th of August, 2004.

Today the parish encompasses the Catholics living within a radius of about 100 km. from Bourgas, as well as the Poles working in the city.

During the holiday months we provide pastoral care for foreigners vacationing on the sunny Bulgarian beaches. We have repeatedly cooperated with consulates and embassies in response to requests for assistance from tourists in difficulty.

History of the temple

In 1859 on the initiative of Father Damyan from Avrito a place was bought for a Catholic church in Bourgas and a parish home with funds from private foreign contributors. After the purchase, requests were made to the Turkish authorities to legalize the property. The firman with which the sultan allowed the construction of a Catholic church in Bourgas is dated 26th of July, 1859. According to this royal decree, a consent was given to build a church for the sailors of the merchant ships coming to the port.

On 8th of August, 1859, Monseigneur Philip from Bologna, Apostolic Prefect, Capuchin of Trebizond, laid the foundation stone of the parish house and the church in Bourgas. Due to lack of finances, only the priest`s house was built before the Liberation. The first catholic temple in the parish was built in 1888. [1]

During a pastoral visit to Bourgas by Bishop Vincenti Peev on 30th of April, 1934, a decision was made to build a new church. The foundation stone of the new Catholic church in Bourgas was laid in May 1936. The plan of the new building was made by the Bourgas architect Svetoslav Slavov. The church was completed under the guidance of Pencho Hristov from Gabrovo in 1937 and consecrated on 12th of September of the same year by Bishop Vincenti Peev. [2]